There are a couple of gaming accessories that I've discovered (that most people discovered a long time ago) that look like they can do a really good job of making my games a little cooler. 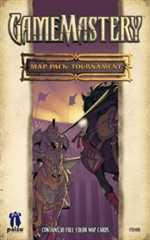 1: Dungeon Tiles (Wizards of the Coast)/Game Mastery Map Packs (Paizo): Most of my players are perfectly content with using a grid map with wet-erase markers. People have liked me pulling out the Dungeon Tiles recently. I don't think they pull away from the imaginative role-playing at all. They're not indispensable, but they definitely add to the minis experience.

The Dungeon Tiles are nice and affordable (about 10 bucks a pack). The sets mix-and-match pretty well, so I've had some nice dungeon layouts with them. Its nice using the outdoor tiles as well, instead of drawing out wooded areas on the battle-mat. 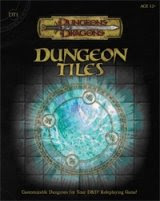 The map packs just look neat. I only have two sets: a tournament field, and a graveyard. They look nice, but have to fit together, puzzle-like, to set the entire scene (buildings are divided up between several tiles, for example). They're a little more specific than the dungeon tiles, and you end up spending more for less (compared to the Dungeon Tiles), but they look nice, and have very specific set-dressing. 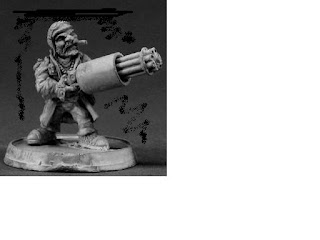 2: Chronoscope miniatures (Reaper): I like subtle genre-mixing in my games. My sci-fi games have a little cyberpunk-feel to them. My fantasy incorporates horror. The Chronoscope minis are a collection of minis sculpted to resemble either specific time-period characters (like 19th century British soldiers or 20th century James Bond types) or genre-mixed characters (like, my favorite, a dwarfish dude with a sword, leather-cap and gatling gun). I haven't painted any up yet, but they'll be next on the list after my 40K army.
Posted by MWG at 3:45 PM