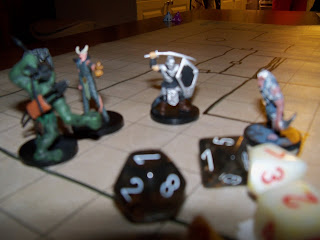 My son and I often pull out my D&D or Star Wars minis and play a little game. We play a skirmish-style Star Wars game, where one of us gets clones, or stormtroopers, or droids, or Rebel troopers, plus a couple of heroes. The object of the game is to get to a particular door, or blow up a console, or destroy the attackers. If we pull out the D&D minis, we play a quick little dungeon-crawl, no more than 3 or four rooms, and my boy gets to beat on some goblins or skeletons, or whatever monsters strike his fancy at that moment.

Today, we tried something a little different. I pulled out the Microlite D20 rules, had him create a character, and we played a little more sincerely. The adventure began with an old wizard coming to the home of his character ("Knight Smith"), asking for help to recover a crystal ball from an old castle. What happened next was gaming gold.

I described the approach to an old, ruined castle; there was a drawbridge, a dry moat, and an open doorway to the castle. I described a gnoll ("dog-man") sitting just beyond the doorway, eating soup at a ramshackle table, with an axe at his feet. My son told me his character would talk to him, asking him if he knew where the crystal ball was. He and the gnoll talked for a little while and, once the gnoll was convinced that my son's character wouldn't try to fight him, led him to the door to the dungeon. The gonll even offered some useful advice..."The goblins downstairs aren't really bright." My son thanked him and moved on.

One trapped hallway later (my son's character got through it by going back up and asking the gnoll if he was good at tripping traps), he made his way to a door. He heard goblins beyond. His solution to the problem...style:italic;">go back to town and get help!

Smart kid, this one.

One hired-gun cleric added to the party, and they went back into the dungeon. My kid's plan...knock on the door to the goblin lair and tell them, "Hey, we're a couple of goblins looking to join up!"

Once the goblins let them in...my we put down the minis and drew the dungeon on the battle-map. Things went really smoothly...the kid took well to the Microlite rules :)

Later in the game, the boy's character and his cleric-helper encountered the Goblin Chieftan and his bodyguards. Nearby was the magical crystal ball. The boy's plan went flawlessly: knock out the chieftain, and then declare to the bodyguards: "Your chief has been defeated! Give us the crystal ball, and we spare the rest of you!" he also made a proposal to them: let him leave, and promise never to attack the village, the the goblins could live in the abandoned castle. On top of that, he would tell the cleric to heal all the goblins that had been defeated!

So, by the time we were finished, the boy's character had made allies of a gnoll, added a cleric to his adventuring party, recovered a magical artifact, and gave a home to a tribe of goblins.