At my age, I have to pace myself

Sometimes, I get really lucky.

A short time ago, I hit a nearby used bookstore. I found a bunch of treasures there, including an old Deities and Demigods (which ended up being the big find...more on that in another ost), as well as an old Avalon Hill war-game. Stuffed along the few gaming books and wargames, I found this little gem: 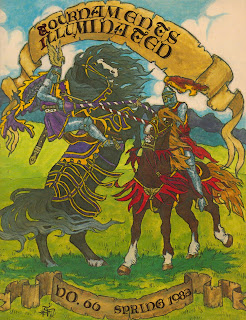 An old Tournaments Illuminated from 1983.

How awesome it that?!

The inside is full of typewritten pages and hand-done drawings. Articles range from, "What my Award of Arms Means to Me" to a history of kites. Its beautiful...a zine that represents the down-and-dirty, grass-roots feel of the earlier SCA. Its obviously a work of love and patience.

I love that do-it-yourself feeling that I get from this magazine. The cottage industries that are supported by the hobby certainly make any SCAdian's life easier...certainly, I wouldn't have half the gear or garb I have if I had to make it all myself and rely on my own craftiness. The feeling I get from seeing an old periodical like this, though, is more counter-culture, more small-community feeling.

At my first Kings and Queen's Rapier Tournament, there was talk about the Cording System's email group. This was the mid to late 90's; I was broke, and didn't own a computer yet. I asked how I'd keep in touch with the rest of the group if I didn't have access to email, and was told, "The 21st century is in a couple of years. Get with the times." The irony, of course, that the woman telling this to me was wearing an attempt at 16th century clothing and carrying a rapier. We all laughed. Now, I couldn't imagine an SCA without the web.

It was hard for the SCA to feel special when I was being bombarded with news and info all day. It was hard to feel like I could devote any time t my other hobbies. Suddenly, if I wanted to paint, I felt like I should be making an effort to paint heraldry...that sort of thing. Of course, no one made me feel that way, but with the SCA always in my field of vision, it was hard to ignore any possible SCAdian use for anything I did. The SCA started feeling really...mundane.

Focus on any one really cool thing long enough and you're likely to tire of it. I know people in various fandoms who eventually burn out. I know die-hard convention goers, war-gamers, LARPers, board gamers...the list goes on...who get tired and need time away. Sometimes you need that time to make something feel special again.

I know people who felt that way about church, too, and other social activities. Hit the same nightclub week after week without stop, without breaking routine, and watch yourself loose the motivation to dance, to smile at the barmaid. We have enough free time on our hands that anything can eventually become boring...we grow apathetic, develop a sense of ennui that replaces our excitement and passion.

I'm a geek, and that isn't likely to change. I'm nearing 40, and I still play role-playing games, I play war-games, I'm a SCAdian, I might even LARP again if the opportunity presents itself. I've edited, playtested, and written for gaming products, and spent way too much time thinking about obscure rules from old, yellowing game products. I can't turn down a game of chess and I still read comic books. I love swordsmanship and find it difficult to pull myself away from old fencing manuals. And horror of horrors, my 10 year-old thinks its all cool. If I want to have the passion to get him interested in medieval costumes and gaming books and painting minis and chess, I have to learn to pace myself. I'm not getting any younger and, thankfully, it doesn't look like any of the things I love are going away anytime soon.
Posted by MWG at 4:34 PM