Another year of me missing Gencon. And every year, I say that I'll make it next year. Its tough for me at home this time of year, with most of my friends either at the Pennsic War or Gencon.

My Castles and Crusades game made up for it a bit yesterday. I don't know that I can say that the slightly rules-light system has contributed to more character and story development at the table. Not to say that slightly more complex rules or more book-keeping has kept character or story development down (my Star Wars Saga game was built on personal character development and having the players take a strong hand in dictating how the story would progress). I can say, though, that it feels easier for me to design adventures and encounters, and it feels like less of a chore to run.

Really, this is what Castles and Crusades feels like to me: 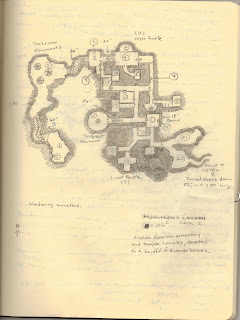 Its the dirty notebooks filled with hand-sketched maps and notes jotted down in the margins. It feels like beat-poetry.

Yeah, rules-light for the win! My Traveller game yesterday (the epitome of rules-light) at ATF went nuts. I'll have to tell you about sometime (normally that's something you don't want to hear from an RPGer, but you know how my games go).

...and I think you know that I appreciate hearing about your games. Even when they make me twitch. The twitching is good...lets me know the neurons are still live.