Big gaming-filled weekend, so lets fill folks in on the highlights:

Friday:
Game: Dr. Who
System: D20 Modern
Have I mentioned how surprised I am that we've gotten D20 Modern to work for this game? The individual classes mean precious little to the players. The special abilities of some advanced classes do a nice job of giving the players the tools to do some high sci-fi wierdness (one PC built his own "K-9," while another jury-rigs high-technology with great results). I'm most impressed by how well the group works together, and how they interact with the setting.

I've thrown away some of the "modern" Dr. Who continuity, and focus on the settings and the characters. Every session is a mystery, with the players interacting as much with the setting as they do the NPC's. So far, they've visited a starship in the ultimately-distant future, a World War I battlefield, a U.N.I.T base in Montana, and a Dyson Sphere called, "New Skaro." They've encountered Cybermen, evil renegade Time-Lords, Daleks (the old William Hartnell-era Daleks that could only move on metal floors), and others. They totally immerse themselves with the setting, and bring alot to the table. Fast becoming one of my favorite experiences.

By the way, I've found a way to make the game progress nicely, and still make it "temporary" enough to give me the opportunity to run another game in the future: I don't award experience points. Every session or two (just about the end of every story, and each story really runs only a session or two), I tell them to just go up a level. Makes a good game.

Oh, and I told you I picked up Traveller, right?

Saturday: I spent most of the afternoon at Natural 20, one of my local gaming stores. I tried out games I've never gotten to try:

Wings of War: World War I bi-plane combat. Very fun, with a nice amoutn of strategy. reminded me a little of Robo Rally, to tell the truth. I'd be interested in playing again.

Formula De: Formula One racing. Absolutely a blast! Most fun time of the night. There's a nice amount of complexity which makes moving little plastic cars around a track engrossing. Stragtegy involves knowing when to shift gears up or down, to maintain a safe but winning speed. Problems or poor strategy can result in blown tires, busted engines, or blown brakes. Loved it, will definately play again. My only complaint is that it really seems like a game you need at least 4 players to do it justice.
Settlers of Cataan: Hated it the first time I played (a year or two ago), but enjoyed it much more this time. Not much more to say about it...time was really just a blur at that point.

Bought some Bretonnain Knights (and will start painting them this week, I think).

One combat, and alot of role-playing. The combat: an infernal beholder.

The really big thing about that game is that its coming to an end. Its been going on for about a year and a half, and has been in "endgame" for the last couple of months. The PC's have gathered enough intelligence about the evil protagonist and his minions, and are ready to take him on. They are just one teleport spell away from their final conflict. They did a good amount of planning Sunday, and will make the Big Jump next session (in two weeks).

Oh, I have to show some shots from the game (especially since I got to use some of my Master Maze kits from Dwarven Forge):


The party makes their way to the door (note, the druid has performed his standard "turn into a bear when wandering around a dungeon" protocol): 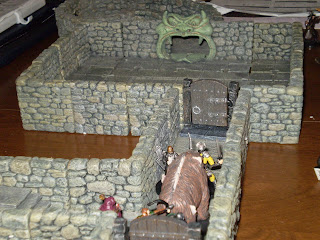 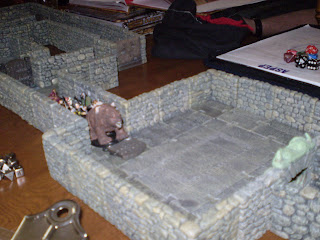 You know, in most D&D games I've played in, the fighter is the one to open the door...not the druid. Then again, when you have a druid who is more comfortable walking around as a bear...

I have some mixed feelings about ending a campaign. I've really enjoyed writing for this game, and the players and I have invested alot of time and energy into it. But all stories have to end. Now, they've all gained a good amount of followers and cohorts, so there's always the option of coming back later to this campaign world (providing it survives the next session) with fresh, level 1 characters. I'd like to do that in the future. Right now, though, I'm a little burnt out with D&D, and am excited about what the group would like to do next.

The group and I talked, and it seems like they'd like to do a Star Wars campaign, set just at the beginning of the Galactic Civil War. They'll play as a small squadron of starfighter jocks (and their support) just starting their campaign against the Empire. I'll have more campaign notes about that later.

Tomorrow (or Wednesday): my review of the Traveller character creation system. Good stuff!
Posted by MWG at 4:44 PM

ok - Dr. Who d20 sounds amazing. I've been a Who-fan for many years going back to #4 Tom Baker.
Sounds like you guys have a blast.

#2 Traveller is a Tri-Stat type system?

Traveller isn't Tri-Stat...it uses a nice-sized series of attributes (not unlike D&D). Its skill-based with careers. More on that soon (hopefully tonight).

The Star Wars game will likely be the Saga rules, which are the newest iteration of the D20 rules.