Castles and Crusades: Back to the days of hand-drawn maps. 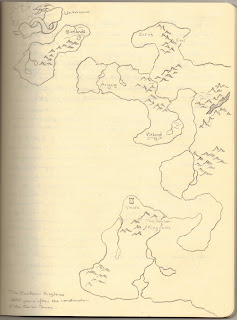 I haven't drawn a map for an RPG in years. I've been so impressed by some maps that my friend Christine has done; the made me want to try making one myself.

When I started making notes for my "Avignus" setting, I had the idea of a very Europe-like environment. I wanted to keep things as familiar as possible. When I started drawing things out, though, I saw how the distances between areas could influence how each kingdom or region would relate with each other. Suddenly I could see who would be the easiest targets for raiding by the Northern Reaches, or how easily the Young Kingdoms could separate themselves from the dying empire of Vitare.

My Castles and Crusades players added more when we sat around the table for the first time, and I got to describe the basic ideas behind each region. "Undead." "Barbarian Kingdoms." "Germany, but with demons and stuff." They added in things they thought would be cool. And now, its developing.

I know there are pieces of software out there to help with mapping. I'm just as comfortable sketching things out.

(Pencil sketch map in the first page of my Moleskine.)
Posted by MWG at 5:05 PM