What's the challenge rating for a Dalek?

My Friday gaming group strives to try new games that are simple, fun, and help make the best of our limited time. By Friday night, most of us are burnt out from work; we want to play something that keeps our attention, but doesn't involve lots of detail. When we're a bit brain-fried, we play board games or card games. We've tried a few different role-playing games (we most recently played a short campaign of Star Wars SAGA Edition, which was alot of fun). I've been jonesing, though, to try a Dr. Who role playing game.

The FASA Dr. Who Role Playing Game was the first RPG I really owned. It was a complicated system, but very detailed. The best part about it, though, was the source material. The supplements on The Master, the Daleks, and the Cybermen were written with both gaming details and storytelling in mind. There are some lessons I learned from those books that I still use in my adventures today. I was so caught up in nostalgia that I had to buy a set off someone on eBay. 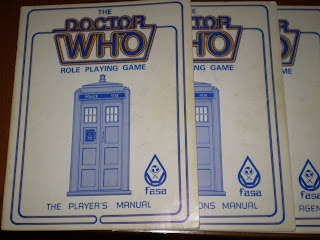 I decided I wanted to run a Doctor Who game, so I pulled out those old FASA rulebooks. After a good read-through, I decided that this wasn't the system for a quick, fun Friday night game. I considered a few other systems, like Spirit of the Century, and Savage Worlds (by the way, if you can find the Explorer's Edition of Savage Worlds, grab a copy. Its ten bucks, and contains a complete play system. Its one of the best gaming deals of the year). After a while, I decided on D20 Modern.

I was disappointed in myself for falling back on D20. The positives, though, outweighed the negatives. We are all familiar with the system, so we do not have a steep learning-curve. The rules are available free via the SRD, so there is no additional investment.

The setting required some specialized rules. I created a few rules for navigating time-machines and navigating through space and time. I created a couple of rules specific to Time Lords. I told players that no characters would have stat bonuses based on race, so any "alien" races are just window-dressing. I have a copy of the Mongoose pocket D20 Modern player's guide, which is fine for character and adventure creation. Set-up involved very little effort, compared to D&D.

Everyone created characters together, after sharing concepts. We played a short prelude session together, so all the players could meet. The preludes involved a burning building, a Dalek combat, a wedding, a volcano, and a guy wishing he could quit his job as a phone operator. Everyone had fun creating characters, and playing their first encounters.

We have one very unique style of character. This is the first time I've encountered this phenomenon. One player decided he wanted to create a character based on an NYPD fireman, trapped in Tower Two as it was falling on Sept. 11 '01. This was the first time I've seen anyone create a character directly influenced by Sept. 11. I hesitated a second or two when I first heard about the concept. I weighed taste vs. character development and storytelling. I decided that this particular player wouldn't do anything distasteful, and I was very curious to see how he would portray the character. So he created a jock/career NY firefighter, with an interesting history and motivation. The character injects an interesting dynamic into the game; he's the only one of these castaways-in-time who actually wants to go back home.

The game gives me a chance to go back to my childhood, when I was a fantastic Who-vian (never missing an episode on the New Jersey Network on Saturday nights, 9:30 PM 'till 11:00 PM). A few friends in the group remember the old series with fondness, so we enjoy reminiscing via roleplaying. Its an exciting experiment, and I look forward to every session.
Posted by MWG at 5:02 PM